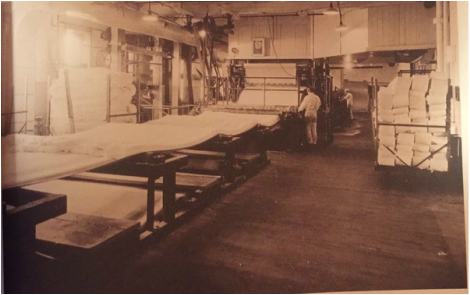 The image above from 1924 shows updates to the Badger-Globe Mill which allowed manufacturing of Cellucotton.
"Shared Values: A History of Kimberly Clark" (pg 51)

The Roaring Twenties to the Nifty Fifties

The best decision that Sensenbrenner ever made was to hire Ernst Mahler as the engineer to create products. Sensenbrenner saw the industry changing. He saw that there was more scientific research and technical research which made the products more uniform. He also saw that U.S. tariff laws made it cheaper to produce paper in Canada. Sensenbrenner switched to commodity and specialty paper. Ernst Mahler was hired to bring technology to the forefront of the manufacturing process.

Mahler was hired on April 15th 1914 and he set up a lab in Neenah right away. He was very enthusiastic. James C. Kimberly and Mahler took ideas from German, Austrian, and Scandinavian Mills. Mahler improved the quality of paper by bleaching and refining paper. This process was faster, cleaner and led to sharper printing. Even the New York Times was impressed with Mahler's work, as the New York Times started to use Kimberly Clark paper.

Mahler also invented Cellucotton. The use that Mahler intended it for was to use it as a bandage. Mahler even went to Washington D.C. to convince the U.S. government that it could be used as wound dressing . This allowed three machines to be added to the Neenah Mill. Kimberly Clark made no profits from selling Cellucotton to the U.S. for the war efforts (World War I). After the war ended, Kimberly Clark bought back all the Cellucotton and sold it to the hospitals, however, the hospitals were hesitant to adopt this technology. Kimberly Clark used Cellucotton to create a superior sanitary feminine napkin. This product entered the market in in October 1920. Kimberly Clark used a subsidiary to sell Cellucotton in case it failed. This was Kimberly Clark's first consumer product and was revolutionary. Sales started off very slowly, but Sensenbrenner still backed the product. Kimberly Clark hired a new advertising company which forced a product that was formerly taboo to be talked about. The product was paid for by dropping fifty cents into a box and then walking out. This product was such a good idea that imitators emerged. This product was successful because Kimberly Clark never rested on their laurels, they kept innovating.

Kleenex was discovered by accident. Kleenex helped to make Kimberly Clark a consumer product company. Kimberly Clark experimented to get the perfect tissue but they weren't really sure what it was going to be used for. People needed something that could remove cold cream which cured face burns from riding in cars and it was cheaper than facial towels. Celebrities endorsed Kleenex which helped it take off along with having ads in all major Women's Magazines. The use changed when a farmer used Kleenex as a handkerchief. This use really took off. Kimberly Clark offered free trials to see which use was more popular. The handkerchief use won. In 1935, Kleenex appealed to everyone not just women which greatly increased sales. Kimberly Clark used a lot of commercials on the radio to help spread awareness. Little Lulu helped to sell Kleenex from 1941 to 1950s.

Kimberly Clark survived the Great Depression and helped the war efforts. Kimberly Clark survived the Great Depression because they went public in 1928, also to preserve the roots of the company, and because the mills operated at a higher efficiency. For World War Two Kimberly Clark directly developed: Camouflage paper, decontamination suits, delousing bags, thermal vests, waterproof shipping containers, disposable bad weather clothing, and tarpaulins and laminates for ammo boxes and military luggage. Kimberly Clark was a subcontractor for: piston rings on landing gear for aircraft, gun sight assemblies, bomb dies, cargo winches and rudder shafts for large amphibious landing ships. Kimberly Clark was also a major supplier of book and mimeograph paper. Because of the amount of women who were working, Cellucotton (Kotex) pads were sold in vending machines greatly improving the visibility of Kotex. Kleenex went to hospitals again helping the visibility. Kimberly Clark also created a non absorbent packing material to use a cushion for shipping. Kimberly Clark also made the mounts and turrets for the M-45 which was a antiaircraft weapon. Mahler renovated the Kimlark plant in Neenah to create this product along with fuses. Sensenbrenner retired as CEO in 1942.